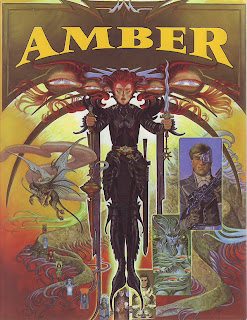 Amber Diceless Roleplaying was released in 1991 and was based on  a series of novels by Roger Zelazny. There are a total of ten  books in the series (perhaps more now) but the Amber game was  based on the first five. These are Nine Princes in Amber, Guns of  Avalon, Sign of the Unicorn, The Hand of Oberon and The Courts of  Chaos and are as recognized as the Corwin Cycle.  The second set of five were used for the only expansion to the game and make up the Merlin Cycle.

More so than any other game based on licensed materials you will  want to have at least recently read the source material once. It  has been years since I read them and can recall parts of it but  this has not been enough and if I were to run and even play the  game I would feel the need to read the books again. This will be  a negative to many making this a game for only serious fans of  the game.

The premise of the Amber series of novels does not allow it to  become a fact book like many other products. The Amber novels in  which the protagonists can pass between an infinite number of  versions of the real true Amber. The game allows the settings to  change at the whim of the players with some judgment from the DM.  This game more so than others allows the players a great extent  of the control. This might be the ultimate sandbox game.

The system as a whole is complicated. In a game where the players  can be anything, create almost anything and go anywhere you would  think a system like GURPS would be called for. This is not the  case for good and for bad. The character creation process is a  point buy system where the points spent on different attributes  are not as valuable as those spent on others. Did I forget to  mention that you will also be bidding against other players for  the right to have the best attribute. In a system where you  compare levels based on attributes this is important. This  captures the ever scheming, interpersonal conflict nature of the  books well though.

The game system has four attributes of which only two might have  consistent direct impact in the game. The game then has a number  of Powers and then not one, not two but three different types of  magic systems. Going into more detail would require much more  writing and time. There is a huge amount of web based released by  a devout following of the game online. This content helps correct  the perceived shortcomings in the game.

An Amber game works better when there are a large number of  players. The game will also be much more focused on the  individual player than the group as a dynamic. It will also take  a much more adaptive GM than many other games. In this one you  can not have the adventure detailed down to the Nth degree as the  players will simply go to another shadow where things will work  better for them. A GM in this game will need to be able to ad-lib  almost any aspect of the scenario.

I know I have not done it justice and in some cases may have made  it sound much worse than it is. This game falls into the love it  or hate it realm. There is not much room in the middle. Odd for a  game where the setting is all shades of gray (shadows) of the  real world. If the players (and the GM) like structure, dice  rolls and player cohesiveness this will not be the game for them.  If there is a fondness for randomness, creativity and a  Machiavellian nature to you then this might be your cup of tea.  Since the game can be found in the upper tier of cheap range this  is worth checking out but you will want to read the first five  novels before delving too deep.

- Three complete adventures, including "Thron War," "Battleground  on Shadow Earth" and "Into the Abyss!"

- Attribute Auction system where players big against each other,  creating a unique family of immortals!

- Enter a universe where Pattern lets you "walk" to any world you  can imagine, where Logrus tendrils can reach across infinite  dimensions,and where Shape Shifting lets characters sprout wings!

- A mature, demanding, and time-consuming system that puts character development above all else!

- Over 100 pages of tips on role-playing style and technique with  dozens of crystal-clear examples!

By means of this spell the magic user will be able to recall  spells. These will be in part from the previously cast spells  that the caster had memorized and used for the day and from any  spells that the caster knows.

When the spell is cast the caster will immediately be able to  recall any one spell of their choice. The spell that the recall  will need to be one that they have already cast for the day.  There is no limit on what spell is recalled except that that  spell can not be Arcane Recall.

In addition they will have two spells recalled along with the  initial spell. The spell level for these spells will be  determined randomly. These spells are also limited to spells of  sixth level or lower. The DM will need to roll a d6 to determine  the level and then determine the exact spell of that level  randomly as well.

This spell will allow a player to actually have more spells  memorized than they should for a period of time. Once Arcane  Recall is cast if the character has too many spells they will  have one round per point of intelligence they possess to get rid  of any excess spells. The spells cast need not be those recalled  though. Players will only be able to cast Arcane Recall once in  any given 24 hour period due to the powerful nature of the magic  involved.

Disclaimer: The spells that you will see, for how ever long the  write ups last, were all written up or conceived of back in the  80's so the terminology may not appropriate for anything other  than 1e and depending on how well I did back then it may be  slightly off for that as well. If there is any duplication of  spells that exist now it is most likely I wrote mine first :)  Please feel free to comment on them but try not to be too hard on  me. If anyone wishes to use these in anything they print please  let me know in advance and all I ask is proper credit.
Posted by Wymarc at 6:10 AM

I am firmly in the "Love Amber DRPG" camp! I spent many a game session in my gaming youth running this system. I was lucky to have some good friends to play this with, and we had a ball causing all sorts of trouble across the Amber universe. What an incredible series of novels, and an equally stupendous game from the late Erick Wujcik! Thanks, Erick!