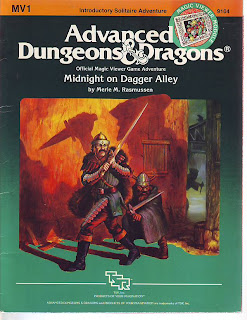 MV-1 Midnight On Dagger Alley was the first in the new  MV line of solo modules from TSR. The MV is Magic  Viewer and it replaced the invisible ink pens that were  even more aggravating than this idea. This was released  in 1984 and comes in at 8 pages.

I am not a big fan of the solo adventure. If you are  going to play the game solo then there are probably  better things to do with your time. This is nothing  more than a small pick your own path adventure. If you  are going to spend money on this please instead pick up  some of the Fighting Fantasy books. They are better  written and last longer.

I will give the new line credit where credit is due  though. The magic viewer (red cellophane) is much  better than the ink used for earlier modules. This  could at least be reused again and again....did I  really just write that. This is also one of the few  adventures I can think of that were designed for use by  assassins (though monks and thieves were an option as  well). The classes it was designed for do work better  and perhaps best alone.

In the end I have this because I am a completist. I am  not a fan of the idea of solo play having done it for a  month while grounded in school I can say it is pretty  boring. I did get to roll up some nice random dungeons.  Buy this only if you really want it as I can't  recommend it.

"As darkness presses into the narrow, muddy alleys of  Goldstar, silent shadows slip out of hiding. Now is the  hour for cutpurses and cutthroats to creep into the  night to do their work. Would-be victims bar their  doors and lie sleepless in their dingy hovels waiting  for dawn.

your task sends you into this dismal, dangerous place  after sundown. No moon lights your steps as you scurry  past yowling cats in smoke, fog-filled alleys. Above  you and beneath you lurk unseen encounters. Somewhere  ahead in the despairing gloom lies your goal, if you  can survive Midnight on Dagger Alley.

This module uses the 'Magic Viewer' (a red cellophane  window) to obfuscate content for solo play."

When this spell is cast the magic user causes a single  entity to turn around an leave the presence of the  caster. The affected victim will think of nothing else  but following the command to begone from the area of  the caster.

The effect of this spell is not one that will cause the  victim to run. They will simply turn and begin walking  away at a normal pace. They will and can not be  distracted by anything else. Trying to stop them from  putting distance for the duration of the spell will  cause them to become violent.

While the spell is in effect any attempt by the caster  or the casters party to affect the individual will  break the spell. The victim will otherwise be silent  and do nothing but walk away from the caster. They will  behave mindlessly with no communication. When the  spells duration expires the fog will lift and they will  stop moving but they will have no idea of why they are  where they are, how they got there nor any memories of  the caster or their group.

Disclaimer: The spells that you will see, for how ever  long the write ups last, were all written up or  conceived of back in the 80's so the terminology may  not appropriate for anything other than 1e and  depending on how well I did back then it may be  slightly off for that as well. If there is any  duplication of spells that exist now it is most likely  I wrote mine first :) Please feel free to comment on  them but try not to be too hard on me. If anyone wishes  to use these in anything they print please let me know  in advance and all I ask is proper credit.
Posted by Wymarc at 5:48 AM

I have the Solo Adventures for Fighter and Thief, now I need to get this one.

I think the Solo adventure is a good way to introduce a new player to the game. Give them some experience before they join a group.

But that's just my take on it.