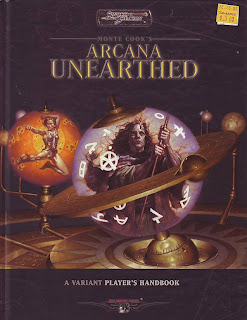 Arcana Unearthed is marketed as a variant player handbook. It was  released in 2003 by Malhavoc Press. It is a d20 product that is  compatible with D&D 3.0 under the OGL. The book and system seems  to be one of the most accepted alternative products that were  released for the 3.x product line. It received a ENnie nomination  for Best d20 Game in 2004 and was a Gold Winner.

The book has some advantages for how well it works under 3.0 and  d20. It was written by Monte Cook. Malhavoc Press was a company  that he founded. Being one of the primary creative forces behind  a product might give one a distinct advantage when creating  supplemental products for that product but then again I could be  wrong.

Arcana Unearthed (I always want to write that the original way)  takes the D&D setting and gives it a Talislanta or Jorune spin.  The races in the game are not your traditional fare. There are  humans but none of what is normal in the D&D system or under the  core d20 rule set. There are some that come close to other but  for the most part they are unique enough to cause a reaction from  some. It was sometimes referred to as a "furry" game because it  has races that are derivative of animals. I think this complaint  was overblown.

The book also includes eleven new classes that are to be used in  place of the other core classes. These in some cases seem to be  the core classes broken down and then reassembled to make them  work different and in some cases better. In the end this also  helps make the setting using the Arcana Unearthed seem different  enough to make it stand out.

The magic system is has also bee changed in a number of different  ways. One of the ones I like best is the inclusion of the True  Name concept. I am a huge fan of the Earthsea stories and the  idea of every being having a true name has always been one that I  liked. In a role playing game a true name that is required for  some spells to be used makes for a whole new level of player  interaction. Another nice touch is that the spell descriptions say  specifically if a spell can be made into a magic item and the  cost to do so if possible.

The book is 254 pages long and contains a lot of information. One  of the detractors from the book is the fact that other than the  cover everything else is done in B&W. I know that for the old  guard this is the way things used to be but it is nice to have  some color in a book now. Being released closer to the beginning  of the d20/OGL era I think might be part of the reason for that.  This is not a huge issue but it could use something to break it  up a bit.

This is not an in depth review. There are a number of these on  the web and most everyone has already seen and/owns a copy of  this book if they are interested. The book being 3.x based may  mean that many of the people who see this may not be a fan of it.  I still hold out that any book can yield something that any GM  can find a use for. I got this one cheap, real cheap actually,  but even if you have to pay more this is one worth picking up.

The ability will also cause the spell to not affect the caster.  The spell that is being chained must be one that affects a single  target. The caster will need to pick a target that would be in  range of the spell as if they were casting it. Once the spell is  directed at someone they will need to make a saving throw. If the  save is made they can chain the spell. This is done before they  determine if the spell effects them or not. The spell may not be  sent to the initial caster or anyone that has already chained it.  If there are no viable targets in the range of the spell it can  not be further chained.

Disclaimer: The spells that you will see, for how ever long the  write ups last, were all written up or conceived of back in the  80's so the terminology may not appropriate for anything other  than 1e and depending on how well I did back then it may be  slightly off for that as well. If there is any duplication of  spells that exist now it is most likely I wrote mine first :)  Please feel free to comment on them but try not to be too hard on  me. If anyone wishes to use these in anything they print please  let me know in advance and all I ask is proper credit.
Posted by Wymarc at 6:05 AM

I like this book and the fresh setting and rules tweaks it presents. The follow-up and expansion books stomped a lot of that freshness into the ground for me. There's a lot of good stuff in that book, hope you enjoy it.