Best of The Dragon #1, Magical Disjunction 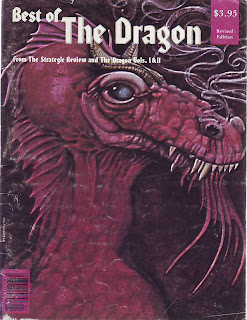 Released in 1980 Best of The Dragon is either going to be my favorite in the "Best of" offerings or it comes in a very close second. I go back and forth as to which had the better and more useful articles. I thin the fact that the first and second issues out pace all others indicates that the quality in the earlier issues was so much better than the later issues.

The first issue is broken down into three major sections. These are Design/Designer Forum, Dragon Mirth and Variants. The issue I have with any of the magazines like this is the inclusion of any major amount of what I would call fluff and that is what most of the Dragon Mith section is. The saving grace is that most of it is fiction or written material and not a lot of cartoons.

The first section is loaded with great information from. This ranges from articles on mutants in the Metamorphosis Alpha game to an article on the meaning of Law & Chaos in the D&D game. The articles on Hints for D&D Judges, the Development of Towns and Deserted Cities of Mars stand out as some great articles dedicated to helping DMs of the early era make their games and what they designed better.

The third section is the Variants section. This section is probably even better than the first section. In this we get to see the early idea behind, the Illusionist, the Bard and the Ranger classes. We are also presented with information designed for solo play which I have gone record as not being a fan of but if you are going to do it this is the way to go. The article on creating random monsters is very useful in mixing it up for jaded players. The real gem here though in my mind is the section dealing on Witchcraft. I have said before i am a fan of witches in the game and this predates either of the articles that presented witches as an NPC with a wink to playing them. This is more on the basics behind witches and witchcraft.

If you want a look at the glory days of The Dragon this will be a way to accomplish that without having to spend a ton of money. Early issues of the magazine can get expensive the further back towards #1 that you go. The CD collection is most often $100 plus or so as well. The Best of Magazines can be picked up under $10 in most cases and often cheaper than that. I would suggest you indulge yourself and pick some of them up. Not sure if you should start with #1 or #2 though.

Please note that this spell is the younger sibling of Wave of Disjunction. I wrote the higher level spell up a bit ago and should have done this one first.

When this spell is cast the magic user causes the magic items and/or magical effects on an individual to have the bonds of magic connected with them broken. This effect will either be permanent or temporary based on the saving throw.

Every magic items on the individual as well as any magical effect on them will be required to make a saving throw. Items or effects that make their save will have their abilities disrupted for 2-5 rounds. Items or effect that fail the save will have the bonds of the magical effect permanently broken. Magic Items with pluses will receive those as pluses to their saving throw. The save of the items will be made as if the owner of the item is making a save versus death.

Disclaimer: The spells that you will see, for how ever long the write ups last, were all written up or conceived of back in the 80's so the terminology may not appropriate for anything other than 1e and depending on how well I did back then it may be slightly off for that as well. If there is any duplication of spells that exist now it is most likely I wrote mine first :) Please feel free to comment on them but try not to be too hard on me. If anyone wishes to use these in anything they print please let me know in advance and all I ask is proper credit.
Posted by Wymarc at 5:40 AM