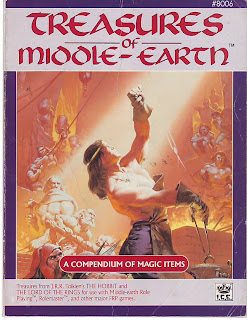 Let me start by saying that I really like the book Treasures of  Middle Earth. It has some great write ups on magic items and the  content not dealing with the actual items is simply amazing in its  detail. I would expect nothing less for an ICE MERP product. I am  not sure if they ever made a bad one.

Next let me say how much I hate the idea behind the book. Sorry  for the dichotomy here. One of the things that stand out when  reading the Lord of the Rings is the rarity of magic and magic  items in the stories. Treasure of Middle Earth (first edition) is  144 pages long and almost a hundred pages of that is filled with  magic items. I would almost never have to use this book in a long  running MERP campaign if I was running it.

The book is very much worth having though. It treats magic items  they way they should be. Most are named and not generic +3 Dwarven Thrower. As a player I loved getting magic items and as a DM I was  often too liberal in their distribution but that was when I was a  young and dumb. Often times it seems if there is some mystical  factory where magic items come off an assembly line daily. I think  if someone went to the trouble to create a magic item they are  going to want to make it unique enough to deserve its own name.  The act of creating the item should be hard enough that there is a  story connected with it as well.

The book is broken down into three different parts. The first  combines the the Introduction with the sections on how to use the  book. The second part is the section detailing the specific  magical items. It also contains the information on the Creators of  magic items and the materials used in their creation. Part three  deals with the treasure classifications and generating random  treasure.

In my opinion it is the later section of part two that is what  makes the book the most valuable. It lays out the various  components that would be used in the creation of magic items and  what type of items they might be used for. This list is as  follows.

In the end the book is very much worth having. My concerns are not  with the book but with the magic heavy nature of role playing  games in general. In fantasy literature of of the great tropes is  the protagonist being left a great magic item by a parent or other  family member. I guess in game terms that would have to be a +5 or  better, and intelligent, items because most everyone else already  has a +3 or better weapon.

When this spell is cast the magic user will cause a standard  mirror to become magical in nature. The mirror will then be able  to show the caster anything that had been reflected on its  surface.

The period of time that the caster can ask the mirror to start at  is open ended. If a time is specified before the mirror existed  then the spell will fail. The caster can also control the flow of  the images that are displayed. They can speed the flow up or slow  it down, even pausing or reversing it if desired. The can change  the aspect of the image and there is no sound connected with the  images. It should be noted that the images recorded are not tied  to the mirrors current location.

The mirror will continue to display images for as long as it can  or until the caster wills the effect to stop. The magics connected  with this spell will eventually become chaotic in nature. The  caster can depend on the images for a actual viewing period of  time equal to six turns (one hour) per their level of experience.  After that time period there is a 5% cumulative chance per hour  spent viewing that the images will be altered and start showing  things as they could have been.

The material component of this spell is just the mirror that the  spell is being cast on. The mirror will be restored to its normal  abilities once the spell expires. There is nothing to prevent the  spell from being recast on the same mirror again.

Disclaimer: The spells that you will see, for how ever long the  write ups last, were all written up or conceived of back in the  80's so the terminology may not appropriate for anything other  than 1e and depending on how well I did back then it may be  slightly off for that as well. If there is any duplication of  spells that exist now it is most likely I wrote mine first :)  Please feel free to comment on them but try not to be too hard on  me. If anyone wishes to use these in anything they print please  let me know in advance and all I ask is proper credit.
Posted by Wymarc at 8:56 AM

Mirror Vision is quite a useful spell for a spy or investigator.

Tolkien got me started, The Silmarillion is my favorite of his works.

But I found Middle Earth -- and Gandalf -- a little too "magic lite" in later years.

But that doesn't keep me from re-reading the books!