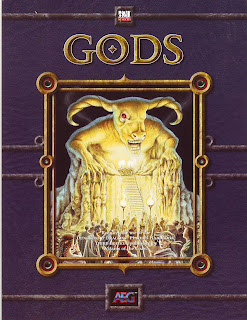 In any fantasy campaign one of the driving elements that a GM can  use is religion. The power of religion tops that of nationality  in what it can bring about in way of action and in some cases  atrocity. The same is true in reality as well but I am not going  to be stepping up on the soapbox today. For their to be a religion  there is usually a god connected with it. There are godless  religions but they are much more rare.

The GODS book by AEG, released in 2002, offers the GM information  on deities for races that are not part of the core races in the  D20 system. There are a total of sixteen races covered in the  book. Many of these will fall into the realm of monsters. This  may not be helpful in allowing players new options but it will  serve to provide the GM information on their adversaries.

The book packs quite a bit in its 160 pages. The same information  is not provided for each of the races detailed in the book  because in some races it may not be relevant such as there not  being an organized religion among that race. The book contains  enough in the way of illustrations to be helpful but not  overwhelming. Overall the quality of the art is well done.

The chapters which are broken down by race will begin with a  discussion of the deity or deities connected with that group.  There will then be information on how the deity is worshiped and  the goals of their followers. Being a D20 book there will be the  standard mixture of new prestige classes, feats and spells along  with new domains. There are also a large number of new magic  items that are detailed some crossing into the realm of artifact  or relic in power.

The races, as mentioned earlier, contain a good mix with the  majority seeing to be what would be considered monsters. There is  a mix though and even some of what would be considered monsters  may be something that the DM might allow as a player character  race. The information from this book might even be enough to  serve the GM to allow them. The list includes some races that  already have enough information provided elsewhere but it  provides new options. The races that have information provided in  the book are below:

The final portions of the book are chapters on the importance of  religion in the game and concerns about role-playing of  religions. The book features a nice set of summary tables as  well. There is a listing of all the various deities described in  the book. This table will include their holy symbol and weapon as  well as their alignment. The last section will be a summary of  all the new domains and the spells in each.

As I put forth earlier on the strongest storyline elements a GM  can use is religion. If the campaign goes beyond a series of hex  or dungeon crawls geared toward personal wealth and power there  will have to something that drives the campaign along. The two  major options will be politics and religion and I find that the  latter is more polarizing in most cases. This book will help the  GM come up with new adversaries to assist in this and might even  offer up new found allies for the players to draw from.

This is a Guide to the Heavens

This sourcebook contains the gods of dark elves, orcs, minotaurs,  trolls, and even monstrous aberrations that have no religion. 16  different races are detailed within, providing DMs and players  with information and rules about the divinity of their  adversaries. Each chapter details a separate race, with enough  information to fuel an entire campaign or just a few evenings of  gaming.

When this spell is cast the magic user will find themselves with  the knowledge on the social mores of a particular culture. They will know the proper way to behave in a given situation.

The caster must select a target creature to base this knowledge  off of. The knowledge will be based on what the core culture  believes to be normal and not what the target might want to do or  would even normally do. The knowledge will be enough to make sure  that they do not do something that would be considered insulting  to those from that culture.

Disclaimer: The spells that you will see, for how ever long the  write ups last, were all written up or conceived of back in the  80's so the terminology may not appropriate for anything other  than 1e and depending on how well I did back then it may be  slightly off for that as well. If there is any duplication of  spells that exist now it is most likely I wrote mine first :)  Please feel free to comment on them but try not to be too hard on  me. If anyone wishes to use these in anything they print please  let me know in advance and all I ask is proper credit.
Posted by Wymarc at 10:28 AM

Observe Customs is quite useful. But you had best choose your target carefully, if you get a foreigner like yourself you may not be any better off.