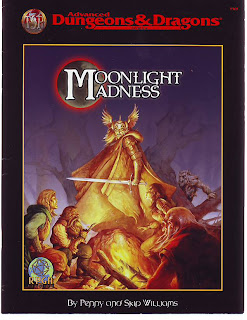 The major reason I joined the RPGA was because of the Polyhedron  magazine that they were sending members. It was about this time I joined that they started sending out modules as well. For the cost of  the membership the items you received were enough to offset what  you paid. It also gave one the right to participate in RPGA  events at conventions and the like. For the record the total  number of RPGA events I have participated in to date total up to  the same number of times I have walked on the moon or seen a  living unicorn.

The modules they sent out by the time I joined were not ever to  going to become super valuable. I maintained my membership for Polyhedron still one day hope to complete that collection. It was/is the completest in me  than needed to be assuaged in regards to the modules. Moonlight  Madness was the first of the modules that were provided as free  material from what I can tell. It was released in 1998 and was  written by Penny & Skip Williams. Skip has a long history of  writing modules even into the 3.5 era though Penny did not seem  to write as much.

The module deals with a group of characters who have recently  been infected with lycanthropy. The module itself is fairly  straightforward. Being an RPGA module it may be a little to  linear in nature for most. The module is not one that will be a  series of combat encounters though. The adventure could be placed  in any setting though I am not sure it is one I would want to  use. There are a number of "interesting" NPCs that I think a DM  could strip out of the module and perhaps use in their own  campaign. The module is 48 pages long but it should be one that  can be run into a single setting.

You can find Moonlight Madness in the secondary market for under  $10 without much problem. I am not sure that I would go out of my  way to find it though. If you can find it cheap enough that you  would be willing to gamble that amount of money and not feel bad  if you lost then pick it up. Feelings on this module will most  likely run the full range but it may be weighted to the negative.  It does have a great cover though.

"The moon rises, and you feel yourself start to change. Fur  sprouts from your palms, your fingers turn to claws, and a howl  rips from your throat. Your clothes shred and tear as your Other  Self breaks free....

Moonlight Madness follows the exploits of six unlucky heroes  trying to free themselves of the curse of lycanthropy while  evading a full-scale werewolf hunt lead by a crusading paladin  and his doughty army. Hermits, sphinxes, dinosaurs, pixies,  Amazons, bandits, and a friendly game of "Dwarfenball" are only a  few of the challenges that stand between the heroes and the cure  they seek. Will they reach the Hermitage on the Lake in time, or  succumb to Moonlight Madness?

For four to six characters of levels 4-6."

When this spell is cast the magic user is granted the ability to  chain one spell of sixth level or less that targets them. The  ability will allow the caster to cause an exact duplicate of the  spell to be directed at a target of the casters choice. The  ability to chain a spell will remain with the caster once this  spell has been cast for 24 hours until it has been used.

The ability will also cause the spell to not affect the caster.  The spell that is being chained must be one that affects a single  target. The caster will need to pick a target that would be in  range of the spell as if they were casting it. Once the spell is  directed at someone they will need to make a saving throw. If the  save is made they can chain the spell. This is done before they  determine if the spell effects them or not. The spell may not be  sent to the initial caster or anyone that has already chained it.  If there are no viable targets in the range of the spell it can  not be further chained.

Disclaimer: The spells that you will see, for how ever long the  write ups last, were all written up or conceived of back in the  80's so the terminology may not appropriate for anything other  than 1e and depending on how well I did back then it may be  slightly off for that as well. If there is any duplication of  spells that exist now it is most likely I wrote mine first :)  Please feel free to comment on them but try not to be too hard on  me. If anyone wishes to use these in anything they print please  let me know in advance and all I ask is proper credit.
Posted by Wymarc at 9:28 AM