B8 - Journey to The Rock, Shadow Walk 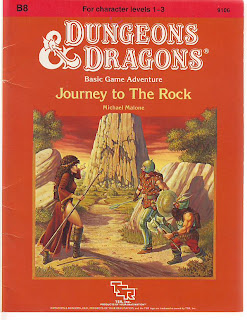 There are modules that you find to be hidden gems or forgotten  treasures. There are then those that for some reason you knew you  just had to have and you knew that they would be something you  would be using again and again. and then in reality that was not  the case. I am afraid that in the case of B8 " Journey to The  Rock" the latter and not the former is the case.

"Journey to The Rock", released in 1984, does sport a cover by  Elmore which is never a bad thing though this is not one of my  favorites of his. The module is also a departure in the B series  that it includes a fair level of wilderness adventure. These  departures are not always bad as was it was done in B6 though  that had its issues as well. I had read somewhere that the module  was based off of a tournament adventure which makes it very linear in its flow which will be a negative to many.

The module has a few other issues. One is the fact that a fair  portion of the module will not get to be played. The idea of the adventure is that the party has three paths to get to their  objective. Unless they split up two of these won't get used in  the module though the DM could save them for later.

One other concern that came to me while looking it over was the  lack of real material there. The module is 32 pages long which is  of average size for modules from that time period. Then I started  looking at the content. There are four full page illustrations in  the module but there are no smaller illustrations so that might  be within the normal range. There are also four pages dedicated  to handouts and pregenerated characters. There is a one page  players map and one page dedicated to post module adventure  ideas. There are three pages for the ToC and the introduction and  two pages dedicated to new monsters. This gives us a total of 15  pages that are not adventure at all.

Once you get to the actual adventure portion of the module there  is one page dedicated to the start of the adventure and four  pages dedicated to The Rock. That leaves 12 pages that are split  between the three paths. This will work out to eight pages of  material that can't be used in the module without some series  redesign. Doing some quick math this gives us what is basically a  9 page adventure.

After spending all this time beating it up I have to say that the  adventure idea is not bad. It is more of an execution issue and  taking the fact that, if what I read was right, and that it was  designed as a tournament module the 9 pages would be about right  for a two to three hour session. In the end is it worth picking  up. I will have to say that I am not kicking myself for having it  but I am not sure it was the best gaming investment I ever made.  It does seem to sell for a bit more than others in the series but  the print runs got smaller after B6 as I recall so scarcity is  the issue there. I see it got between $15 and $25 most of the  time so you might get a better bang for your buck buying some of  the newer stuff released online.

"To a wizard, knowledge is power, and the wizard Lirdrium Arkayz  wants to know the mysterious secret of The Rock. Many have tried  to discover it - but The Rock keeps its secret well. The wizard  offers a rich reward to anyone bold enough to solve this dark  mystery.

But the road to The Rock leads to danger and hidden peril -  dangers that hae claimed the lives of many brave adventurers.  Rashness and folly will lead to quick death, but riches await the  clever and the brave. Have you the wits, courage and skill to  survive the Journey to The Rock?"

By means of this spell the magic user is able to merge themselves  with the shadow of another creature. The effect of this will be  to allow the caster passage to where ever the target creature  goes. Unless something similar to a True Seeing spell is used the  caster will not be detectable and Detect Invisibility will not  allow them to be seen.

The spell does have its limitations and possible peril though.  The caster is limited to casting this on a creature that is able  to and is actively casting a shadow. The caster is also bound to  the shadow and is at the mercy of the creature as to where they  go. The caster can break the merger at any time and will appear  at a distance from the creature equal to what they were when the  spell was cast. They will appear in a spot that is "safe" from  environmental effects but perhaps not other dangers.

There is also another possible danger connected with the use of  this spell. If the creature enters an area where they are not  casting a shadow the DM will need to make note of this. For each  round after the first that there is not a shadow being cast there  is a 5% chance that the caster will lose the connection. When  this happens there are two possible outcomes. There is 50/50  chance that the caster will either have the merge broken as  described above or be cast into the demi-plane of Shadow.

Disclaimer: The spells that you will see, for how ever long the  write ups last, were all written up or conceived of back in the  80's so the terminology may not appropriate for anything other  than 1e and depending on how well I did back then it may be  slightly off for that as well. If there is any duplication of  spells that exist now it is most likely I wrote mine first :)  Please feel free to comment on them but try not to be too hard on  me. If anyone wishes to use these in anything they print please  let me know in advance and all I ask is proper credit.
Posted by Wymarc at 9:31 AM