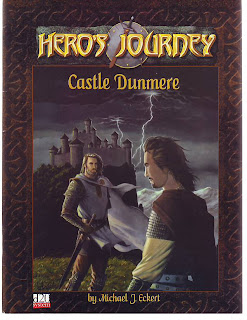 I have mentioned before that one of the problems with d20 and the  OGL was that it allowed everyone who had a passing interest to  become published get published. This has been good in many cases  for the OSR movement. When you look at the 3.x world this has not  always been the case. There may have not been too many true clunkers but there has been a fair percentage of mediocre material  released.

Hero's Journey: Castle Dunmere is an example of what I just  described. It is in no way a bad product it is just average in  nature. There is nothing that makes the module stand out as great  or even a great value. It fills a role simply as an adventure for  characters level 5 to 7.

The module is set in the land of Myrra which is not unique in any  real way. They have changed the names of the races but that is  about it. The material presented for the adventure is done well  enough but nothing that will make it stand out. The art is  actually on the substandard side in my opinion and the cover  price was $8.95 for a 32 page module which was average to high.

As for the scenario itself the premise is one that has been  tried before and it in the end lack anything that is going to compel the players to undertake the mission except greed. Now  greed in a roleplaying game, for lack of a better word, is good.  It will usually work with most players. If it doesn't then the GM  will need to put on their conductors cap and yell "All Aboard".  The fare is standard ending in a four level crawl.

I really wish I could say better things but at least nothing has  been truly negative. Since it was released in 2001 this was part  of what became a flood of 3.x released product. The good news is  that you had no lack of choices the bad new is that you had too  many choices. If there was anything that can be said to have come  from that it is perhaps the community that developed online to  help others become aware of the chaff that was being sold. I  normally don't do this but I would say you can pass on this  unless you want to have the whole series of Hero's Journey or are  using the world of Myrra for your own.


From the back of the module:

Secrets abound at the famous Dunmere Castle. The locals stay away  from what they claim is a haunted estate.

Now the owner of the house, Count Carlisle himself, has gone  missing. His disappearance is being blamed on an old legend  surrounding the castle; that of Countess Carlisle's ghost  haunting the old manor. Sightings of the Countess are on the rise  and the town is terrified.

Is the legend about Castle Dunmere true? There's only one way to  find out.

A fantasy adventure for character levels 5-7.

When this spell is cast the magic user causes a series of  mystical footprints to appear. These will be visible only to the  caster and their party. They will show the most direct path to a  location that the caster will specify when the spell is cast.

The spell will allow the caster to declare one of three specific  locations when the spell is cast. The first will be the closest  uninhabited safe place. The second, if in a dungeon, will be the  location of the nearest exit or entrance to the next level up or  down. The third location will be the path to the exit from the  current location regardless of where it might be in regards to  distance or level.

The caster is actually calling upon an extra-planar being when the  spell is cast. These creatures do not exist on the same plane as  the caster but will have unerring knowledge of any location  summoned to. It should be noted that they take the shortest path  which may not always be the safest.

Disclaimer: The spells that you will see, for how ever long the  write ups last, were all written up or conceived of back in the  80's so the terminology may not appropriate for anything other  than 1e and depending on how well I did back then it may be  slightly off for that as well. If there is any duplication of  spells that exist now it is most likely I wrote mine first :)  Please feel free to comment on them but try not to be too hard on  me. If anyone wishes to use these in anything they print please  let me know in advance and all I ask is proper credit.
Posted by Wymarc at 5:44 AM