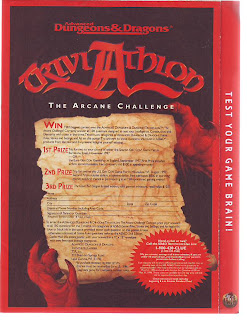 Today I am going to talk briefly about a contest that  ran back in 1996. Before they were bought by WotC TSR  ran a trivia challenge that allowed gamers to answer a  list of questions and win prized including trips to the  Spanish GenCon held in Barcelona.

The challenge was called Triviathlon. It consisted of a  poster that contained 100 questions. The poster was  available through Walden Books and was also included in  issue #227 of Dragon Magazine. The questions were  rather random and involved a lot of research or lack of  any real life. I am not sure if the prizes were ever  awarded as TSR was purchased a few months later in  April of 1997.

In issue #237, the issue that returned Dragon magazine  to publication, answers to the first 25 questions were  provided...along with the question. These ran for three more issues. They are in issues #238, #239, and #241.

The idea behind this must have sounded good but the  actual execution was probably flawed by the changes and  the situation that existed for TSR at the time. The  estimate is that were better than 400,000 of these  printed so it will never be a super rare item but the  number that still exist is probably much, much lower  as they were either used or discarded.

If you happen to see one on eBay and it is not going  for much it might be worth picking up. The fact that  the answers are now published make it more palatable as  you can see how you did. It is a neat little item to  have but I am not sure I would have ever gone out of my  way to find it if I didn't already have it.

The caster will be able to cause one action to fail.  They will also be able to cause on additional action  for every three levels of experience they posses. The  caster can hold these for a period of time equal to  their intelligence in turns. The effect is not limited to an individual. Once the  spell is cast the magic user can spread around the  instances of failure among any individuals they have  line of sight on. They will need to be within 6" (60')  of the caster though.

Disclaimer: The spells that you will see, for how ever  long the write ups last, were all written up or  conceived of back in the 80's so the terminology may  not appropriate for anything other than 1e and  depending on how well I did back then it may be  slightly off for that as well. If there is any  duplication of spells that exist now it is most likely  I wrote mine first :) Please feel free to comment on  them but try not to be too hard on me. If anyone wishes  to use these in anything they print please let me know  in advance and all I ask is proper credit.
Posted by Wymarc at 5:56 AM

There was a bit of discombobulation during the TSR/WotC change.

Not sure what happened at the "end" of this contest. Does anyone?