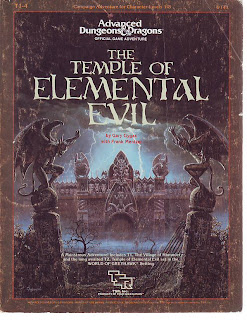 I remember back in 1985 when the Temple of Elemental Evil was released. At that time the idea of the supermodule was new. There were the series that were released such as the Slavers and Desert of Desolation but never had there been something like ToEE. The idea of a single product taking characters from first to eighth level was also great.

I am not going to do too much of a review. It would be hard to find a gamer who has not played in it or heard about it. It includes the previously released Village of Hommlet which has been visited by even more than the Temple. Who has not been to the Moathouse?

My real regret about this module is that I was the person acting as DM when the product was released. I hate to say it but I have never played through the Temple myself. I have run it fully three times and once half way through for different groups. I really wish there was some way I could experience the Temple for myself with no knowledge of it.

Today there are other supermodules that are more desirable such as the entire GDQ 1-7 series. Still though I think the Temple is perhaps the one that I hold the most dear in my heart. There are some that dislike the module and say it is a tad on the boring side but I often wonder if they played it back in the day or picked it up after it paved the way.

This is one you see very often in the secondary market but even with the number you see they still go for a fair price. The map book itself I have seen sell for close to $20. I know you can get photocopies from people but I have a copy I still need a map for and would like it to be an original.

A sinister force, long thought destroyed, stirs from the black hole that spawned it. Like an ebony darkness it prowls the land and safety is but an illusion, for it watches from every shadow and ponders possibilities.

What began years ago with the introduction of the players to the quiet village of Hommlet and the amazing lands of Greyhawk, at last is complete. Here is the long awaited campaign adventure featuring the ruins of the Temple of Elemental Evil! Evil broods and grows beneath those blasted stones. This is your chance to drive it back and scatter its forces again.

This product includes the village of Hommlet, the filthy shire of Nulb, and reveals the ruins of the Temple of Elemental Evil and the labyrinths that lie beneath, a warren of darkness. And beyond these ruins, even more is revealed. For the first time this product provides a complete campaign adventure which will take beginning characters from 1st all the way to 8th level and possibly beyond. Hours of adventuring await you!

By means of this spell the magic user is able to provide protection against one specific effect, creature type or specified item. The DM can use scrolls of protection as a basis for the items that can be protected against.

The material component of this spell will be an item that would normally be connected with what is being protected against. Examples could be sulfur for fire or a vial of water from a water elemental. The component needed is left to the discretion of the DM. The cost will vary but the DM might also require the caster obtain the items needed on their own.

Disclaimer: The spells that you will see, for how ever long the write ups last, were all written up or conceived of back in the 80's so the terminology may not appropriate for anything other than 1e and depending on how well I did back then it may be slightly off for that as well. If there is any duplication of spells that exist now it is most likely I wrote mine first :) Please feel free to comment on them but try not to be too hard on me. If anyone wishes to use these in anything they print please let me know in advance and all I ask is proper credit.
Posted by Wymarc at 5:45 AM

Not in this lifetime! It's not only a classic, but one of my favorites as well.

Long may it reign.

I recall running TOEE with some success. The dryness of it can be overcome. What I like about it today is how it is a font of obscure GH lore.