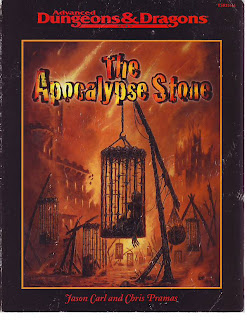 The Apocalypse Stone is a means to end or forever change a  campaign world. Let me start by saying that if this was something  I came up with for my own campaign I would have thought it the  most clever idea in the world. I actually did something similar  with the Codex of the Infinite Planes in a campaign. As a retail  module this might not be the best idea.

Before I ever knew what the module was about I fell in love with  the title and the cover art is so grim you have to want to know  more about it. I had thought it was a module dealing with either  Hell or the Abyss for some reason. Though the nether planes and  the those of light end up getting involved it is in the end it is  all about the end of the world.

I don't want to give too much away but some spoilers may follow.  The basic premise is that the players get tricked into giving  away the stone that holds the world together. They are then given  the task of trying to undo what they allowed to happen before it  gets to a point where it can't be stopped or undone. The villain  in this is classic in their motivation but maybe a little too  angst ridden for my taste. The means used to trick the players is  one I love though.

Given that this was released in 2000 and was one of if not  perhaps the last 2e module I have to wonder if it was intended to  allow campaigns to end so new 3e ones could begin. I have found  nothing to market it as such but the timing and the purpose of  the module seem to match up pretty good. I guess it could be  happenstance but I tend to want deeper meanings in the events I  notice.

Like I said the module was released for 2e and it is 96 pages  long. The idea is one that this is not something that a DM will  just want to throw into their campaign unless the end it to reset  or end it. I thought a good use for it might be to run it in such  a way that the players are living out the end of the world as it  previously happened. The first thought was having it occur while  researching the Rain of Colorless Fire in Greyhawk or something  like that but try and do it in a way they did not know it was  actually an historical event. I then added the twist in my mind  that maybe it wasn't so historical or that they were actually  there somehow and they might be pawns in some larger cosmos level  event or that they might not know their full potential/history.

In the end the module might not be worth buying for everyone. If  you are tired of the way things are going and you want to end the  campaign or change things up enough to make a fresh start of it  then buy it. There are some good points of the module that could  be used elsewhere but overall it has a purpose and it is hard to  use things from it beyond that purpose. I am really on the fence  when it comes to recommending it.

To everything there is a season. Every campaign has to come to  and end sometime, so why not go out with a bang? The Apocalypse  Stone is an epic adventure to challenge high-level characters,  but beware - it will destroy your world!

This adventure has it all: gods and devils, plague and  pestilence, rains of fire, and world-shattering conflicts. Here  is an opportunity for PCs to display undreamt-of heroism...or  fall to ultimate defeat.

The Apocalypse Stone is a tool for Dungeon Masters to present  extremely challenging encounters for high-level parties, to wrap  up a long-running campaign...or both.

This adventure can be used with your own game world or any  ADVANCED DUNGEONS & DRAGONS setting."

The spell will only affect the communication with others. The  casting of most spells will not be affected unless it involves  communication with the target or a summoned creature. Some abilities such as turning undead could also be affected at the  discretion of the DM. Attempts to write by the affected target  will yield gibberish as well.

The duration will be a period of one turn plus one turn per level  of the caster and an additional turn per point of intelligence of  the caster. The target is entitled to a saving throw and if made  the duration of the spell will be halved. Spells or other  abilities that allow for comprehension of languages will not work  as there is no language just garbled communication.

Disclaimer: The spells that you will see, for how ever long the  write ups last, were all written up or conceived of back in the  80's so the terminology may not appropriate for anything other  than 1e and depending on how well I did back then it may be  slightly off for that as well. If there is any duplication of  spells that exist now it is most likely I wrote mine first :)  Please feel free to comment on them but try not to be too hard on  me. If anyone wishes to use these in anything they print please  let me know in advance and all I ask is proper credit.
Posted by Wymarc at 5:58 AM

@Fabian I had to go back and look and there were suggestions for running the campaign after the events if the players were allowed to save the world but not for converting it. Seems like WotC missed the boat there.