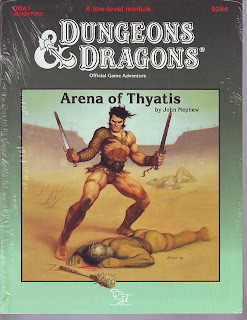 DDA1 Arena of Thyatis was released in 1990 and was labeled a low  level module. Since this followed the other B series modules I  always wondered why it was not a B series module and thought they  were set apart for some reason. I recently read that it was most  likely because of the pending change over from the BECMI "system"  to the Rules Cyclopedia that occurred the following year. I am not  sure if that is accurate or not though.

The module is designed for four to six characters of second or  third level. The suggestion is for seventeen levels though I am  not sure that is too important. The module is as much about role  playing and problem solving as it is combat. The module is very  much a mix of A4 and B6 in plot and feel. I am sure that gives  too much away but the module has been out for a bit.

The module's plot is one that is easy enough to follow and would  most likely be a fun one to DM though I am not sure I would like  it much as a player. The concept behind it is one that as a  player would make me feel like I had no options in what was  supposed to happen which would be an issue. In a module like A4  this carries the plot in a series along but in an introductory  module I might find it hard to stomach. It also falls prey to one  of my concerns in some story lines in that why are second level  characters being sued for something important like this.

The module does have some great material in it. It presents  reasons why the characters might be involved and why they have  attracted the attention of the necessary parties. It also  presents an optional character class the Rake. The Rake is a  swashbuckler/thief which might be a good alternative if a thief  and some of the baggage they carry with them does not fit into  the realm of what the DM wants. It also features a down and dity  unarmed combat system including the option to disarm.

The module itself is broken down into five parts. Like I said  earlier the module has a good mix of combat, role playing and  problem solving. The maps in the module are all well done and the  map of the mansion is something I might "borrow" for use  elsewhere. There is also a nice overview of Thyatis with the  various zones of the city and some important locations mapped  out.

The module finishes off with a society The Order of the Sands  which I am not sure would have any interest for the players unless one of them was smitten with the idea of arena competition. It  also has a page dedicated to Thyatian names. This might seem  wasteful to some but if you are going to use Thyatis as a setting  I think the names of NPCs are not used often enough to add local  flavor. The module also earlier had a synopsis of the legal  system which could be of use later.

Though this would not be my first choice of the lower level "B"  modules to use it is one that I don't feel money was wasted on.  It packs in more than some others and except for heavy handedness  required for the plot it is well done. I see this one go for more  than some other modules and I think it might be that the print  run is lower but that is all conjecture though the label change  may have some affect as well. Regardless of all that this is one  that I would suggest picking up if you can get it for the right  price.


From the back cover:

"It's party time in Thyatis...

And simply everyone is going to the magnificent VILLA  OSTEROPOLUS, home of the wealthy old senator, Helenites. Raucous  fun, exotic food, and even advanced betting on the upcoming Arena  games are expected. Even adventurers just in from the outlands  may meet the powerful here. So don your festive togas, for in  Thyatis City there are important connections to be made and deeds  to be done, duels to be fought and fame to be won.

(But beware, oh Adventurer! The politics of Thyatis can be as labyinthine as the mazes beneath the Coliseum...)

This module is designed especially for the DM who wants to  sharpen his interactive skills.
- Presenting the detailed layout of a Thyatian noble's mansion  and maps of the multi-level Coliseum of Thyatis
- For four to six characters, levels 2-3
- Brief guide to Thyatis legal system
- New optional class, the Rake
- Fast unarmed combat system, including disarming attacks
- Special appendix on creating Thyatian names
- Featuring The DM's Guide to Winging It"

When this spell is cast the magic user causes another spell  caster to be engulfed in an arcane fire. The fire will persist  only for one round and may cause the target damage though there  will be no effect on inanimate objects.

The fire will cause damage to the target only if they are another  spell caster and only if they have spells remaining in their repertoire. If the target has no spells left to cast then there is  not effect to them and the caster will know this.

If they do have spells to cast then the flames will give the  magic user an idea of how many spells by the color of the flames.  The flames will scale along the ROYGBIV scale with R being the  lower number and V being the highest. The target will also suffer  damage from the flames if they have spells to cast. They will  suffer one point per their level plus one point per spell they  have left to cast. The target is entitled to a save for half  damage rounded up.

Disclaimer: The spells that you will see, for how ever long the  write ups last, were all written up or conceived of back in the  80's so the terminology may not appropriate for anything other  than 1e and depending on how well I did back then it may be  slightly off for that as well. If there is any duplication of  spells that exist now it is most likely I wrote mine first :)  Please feel free to comment on them but try not to be too hard on  me. If anyone wishes to use these in anything they print please  let me know in advance and all I ask is proper credit.
Posted by Wymarc at 9:00 AM

Arcane Fire is a fun little combination spell, learn a bit about your enemy and do some damage as well. Mind if I try my hand at a Pathfinder version there of?

Hello there! This was also an interesting addition to the world of Mystara and the Empire of Thyatis as well.

@seaofstarsrpg I don't see a problem. If you end up publishing it in something can you just note the site it came from though.