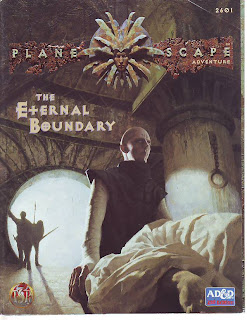 Planescape is a setting that I have not had all that much  experience with. It was released late enugh into the 2e that I  was in one of the down periods of my role playing history. I also  had the misfortune of most of it being released during the "Magic  Years" as I like refer to that time period. Most of the old role  playing group I played with at the time had become enthralled  with M:tG.

Being an old school gamer in my mind the other planes were always  something you did at higher levels. The fact that Planescape was  a whole campaign setting and not just for higher levels actually  escaped me for the longest time. I am not sure that would have  mattered but I just wanted to share that. I have been lucky  enough to pick up everything for the setting at reasonable  prices. Everything except the Sketchbook which I will never own.

The Eternal Boundary is the first published module for the  Planescape setting. It was released in 1994 and was written by  Richard Baker III who has penned many items for TSR/WotC getting  his start under 2e with Dark Sun and Planescape but also  responsible for the SRD for d20. The module was intended to serve  as an introduction to the setting of Sigil and was written for  four to six characters of 1st to 5th level.

The module does a good job of what it sets out to do. It  introduces the characters to the city of Sigil in a way that will  allow them to explore without getting into too much trouble. It  also introduces them to the idea of Factions which will be a  major portion of any Planescape campaign. It even lets the  players make a foray onto one of the Elemental Plane of Fire. It  even gives them a possible base of operations in The Black Sail  Tavern.

The appearance of the module as with most of the Planescape  material is well done. It will have some of the inherent  problems that were part of the second edition of the game but  that can be overlooked for sake of the setting. The module allows  the DM to let the players go where they want in Sigil without  having to force them from encounter to encounter. The Sigil  portion is open ended. There is a progression in the module but  it is laid out without having to railroad the characters.

I really wish I had been able to experience setting when it was  new. It offered a fresh take for the system like perhaps no other  setting has done. It was Spelljammer different without the  seeming too contrived and it offers a level of grittiness like  Dark Sun without locking the players into what was always a  little too drab for me.

I didn't want to give too much away about the module so I will  leave it off here. The module is a great introduction to a  setting that may be one of the best that TSR has ever released. I  am not sure it will ever replace Greyhawk as my favorite but it  was a breath of fresh air as far as settings go. The only problem  is that with being as good as they are and the print runs being  much smaller in many cases the products for the setting can get  really expensive even hitting three figures at times.

"Welcome to the Cage, friend. You'll want to watch your back in  Sigil - it seems every cutter here's got a way to peel a clueless  basher, and you're no exception. Besides, there's something  happening down in the Hive that's got the factions in an uproar,  and word is you're the cutter to look into it. Barmies and  bubbers have been waking up in the Dead Book, but they haven't  been staying there. They've been returning to Sigil with minds  restored, telling tales of the Eternal Boundary. But the air's  turning foul here in the Cage, and there'll be blood spilled soon  if someone doesn't learn the dark of things, an quick!"


The Eternal Boundary is a PLANESCAPE adventure for a party of  four to six characters of 1st to 5th levels. Players are  introduced to the city of Sigil - the Cage, as some call it.  Inside this crossroads to the planes, a sinister plot unfolds,  leading the heroes into the most dangerous and desperate part of  town - the ramshackle slum known as the Hive. Do your player  characters have what it takes to confront the Eternal Boundary -  and pass beyond?

Level: Second
Range: None
Duration: One Hour/Level
Area of Effect: One Creature
Components: V,S,M
Casting Time: One Round
Saving Throw: None

By means of this spell the magic user is able to locate a specific type of creature. The creature being sought may not be what would be considered a normal animal. The creature must be one of a mystical or mythical nature. Anything considered a Monster will qualify.

For the spell to work effectively the caster will need to be in an environment where the creature might normally dwell. This is not a requirement though as if the players know that there is a specific type of monster in the sewers this would work. For situations where less specific information is known being in the correct possible type of location will help.

When the spell is cast the magic user will know the correct cardinal compass point to start looking. The spell will only find a direction if the appropriate type of creature is within less than a days travel on foot. The caster will periodically need to spend one round concentrating to further define the direction. The closer they are the more correct the direction feeling will be.

The material component of this spell will be a piece of flesh or other body part of the type of creature being sought. The component is not used up when the spell is cast.

Disclaimer: The spells that you will see, for how ever long the write ups last, were all written up or conceived of back in the 80's so the terminology may not appropriate for anything other than 1e and depending on how well I did back then it may be slightly off for that as well. If there is any duplication of spells that exist now it is most likely I wrote mine first :) Please feel free to comment on them but try not to be too hard on me. If anyone wishes to use these in anything they print please let me know in advance and all I ask is proper credit.
Posted by Wymarc at 7:32 AM