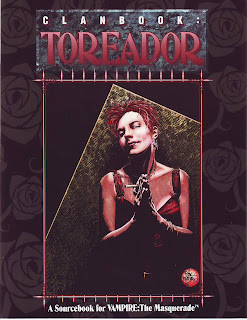 Vampire:The Masquerade changed the face of roleplaying games. This is a game and system that more so than any other is a love or hate it for most. I was a fan of vampires long before this game came on the market so I really like the idea behind it. I hate what vampires have become today. I think this game as much as anything else helped that along.

Dracula though not the first really helped popularize the idea of the vampire. We think of Dracula being dark and dangerous and that is true but there is more. Dracula was when you look at his actions became a little bit angst ridden and this may have been a chink in the armor of darkness.

The clanbooks for V:tM were essential for those that wanted to play the game when it was first released. The first edition of this book was released in 1994 and is 72 pages long. All of these books much like most of the other Storyteller products begins with some game fiction. This is something many hate but I like this in most of the products and in this one it helps set the tone for the clan.

The question will be asked why use this clanbook. I have taken online quizzes in the past and I have been identified as belonging to Clan Toreador. I would not have picked this one for myself so I am not sure what is going on. I would have gone with Ventrue and they are perhaps the closest to the Toreador.

If you are a fan of the system and do not have these I would strongly suggest picking them up. I might opt for the later revised edition or even one under the updated system but regardless pick it up. They can usually be found priced really reasonably either online or at places like Half Price Books.

Here is the information on the clan from one of the online quizzes:

Artistic and maybe even a bit shallow, you belong to the clan of the Toreador. You have a keen eye for pretty things. The embrace is looked on as preserving all beautiful things for eternity. You are the sensual vampires that you hear people talk about that seduce to get what they want. This clan is the one thought of as being the spoiled sort who want to get what they want. However, you usually work right under the Ventrue clan as they try to carry out their plans.

The Toreador are called many things - "degenerates," "artistes," "poseurs," and "hedonists" being but a few. But any such mass categorization does the clan a disservice. Depending on the individual and her mood, Toreador are alternately elegant and flamboyant, brilliant and ludicrous, visionary and dissipated. Perhaps the only truism that can be applied to the clan is its members' aesthetic zeal. Whatever a Toreador does, she does with passion. Whatever a Toreador is, she is with passion. To the Toreador, eternal life is to be savored. Many Toreador were artists, musicians or poets in life; many more have spent frustrating centuries producing laughable attempts at art, music or poetry. Toreador share the Ventrue's love of high society, though not for them the tedium of actually running things - that's what functionaries are for, darling. Toreador know that their place is to captivate and inspire - through their witty speech, graceful deeds, and simple, scintillating existence.

When this spell is cast the magic user will be given the ability to locate any single item. The item they can locate must be specified in the casting of the spell. There will be limits on what item can be specified as well.

The caster will not know the exact location of the item. They will instead know a general direction of the item and a ballpark idea as to the distance away. The closer they come to the item the more definite the information will become. It may start out as vague as to the east and a continent away depending on the distance.

The caster will have one week free to locate the item. After that period of time the caster will lose one hit point per day and one point of constitution per week until the item is located. The caster may stop the location effect at any time. The hit points and constitution lost will be restored at the same rate lost. If the caster does not locate the item before the spell is stopped they will be unable to cast the spell again for the same item for a period of time equal to double the time the previous casting was in effect.

The material component of the spell will be connected with the item being sought after. The caster must have something that has been in direct contact with the item or used in its creation to be able to cast the spell. It should be noted that this spell can be used to locate both inanimate and living objects.

Disclaimer: The spells that you will see, for how ever long the write ups last, were all written up or conceived of back in the 80's so the terminology may not appropriate for anything other than 1e and depending on how well I did back then it may be slightly off for that as well. If there is any duplication of spells that exist now it is most likely I wrote mine first :) Please feel free to comment on them but try not to be too hard on me. If anyone wishes to use these in anything they print please let me know in advance and all I ask is proper credit.
Posted by Wymarc at 5:45 AM