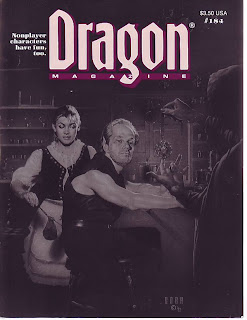 There are covers of Dragon Magazine that stick out in my mind.  Most of these are for positive reasons either because they are  that good or they spur imagination. This one is one of those few  ones that stick out for another reason. It is in no way a bad  piece of art it is just so different than any other I can recall.  I have also always thought that the patron looked a bit like Jack  Nicholson.

I saw this last night while flipping through some scans and  decided I would write about another magazine. I try to limit  these. It was odd that this was the one I found because there has  been some recent talk on villains and not so long ago about being  a good GM. This issue has articles on both of these topics as  well as a few others.

The issues first article is "Courts and Courtiers" and it deals  with NPCs for royal courts. It provides a list of possible unique  personalities that one might find in the court. It also suggests  using the "Foils" article in Dragon #136 which I will have to check out.  It then provides a random chart for court activities and a rather  extensive list of expert hirelings that could be connected with  the court as well as their costs. If you game involved nobles in  any way this will be information to check out.

The next article deals with giving the evil NPCs an even break.  There are some great tips here to make even the most basic of bad  guys more challenging for a party. It focuses on spell casters  but then who doesn't include an evil magic user or cleric in a  dungeon now and then. Most of the spells are low level and in  some cases involve turning tricks players use back upon  themselves which I have always been a favor of. I always told  players if you can have or do it then the bad guys can as well.

The next article was one that really struck a cord with me. I  hate the fact that in many sessions I have played in even the  important NPCs end up being nothing more that stat blocks. The  most memorable events in my gaming history are where there was  role and roll playing involved. It puts for the idea of the seven  sentence NPC. I am going to sue this for every NPC I need to  create from now on. The DM should write a single sentence  describing NPC for each of the seven topics. I will list the  seven topics below which I hope does not violate copyright. I  will quote one of the samples they provide as well.

"Baron "Wardog" Muckdigger is the lord of a small land holding in  east Sembia, of which he is the seventh heir. He is a short man,  clean shaven with a very upright posture. Wardog is a 9th-level  fighter famous for his incredible stamina (Con 18) and his  leadership abilities (Cha 15), as well as his alleged ability at  musical composition (his works are described as being more like  the sounds of war than actual music). Beside composing music, the  baron's greatest love is war, and he will use almost any excuse  to take up arms against anyone he thinks might prove an  interesting adversary. The baron has a rather blunt and direct  way of dealing with people, but mixes it with enough charm to avoid being abusive. He knows a lot about military tactics,  different military organizations and how to defeat them, but  virtually nothing about the back-room politics in Sembia (or  music, for that matter). The baron always talks in a loud voice  with his head stuck right in your face, so you can smell the  heavy garlic on his breath."

The next article deals with villains, as opposed to simple NPCs,  in your campaign. The article calls them reoccurring NPCs but what  is a villain but that. The "good" villain is the one that though  perhaps thwarted finds a way to escape and return again. They  will also need to be fleshed out being something more than a stat  block. Using the Seven Sentence platform above would be a great  start but perhaps make it a paragraph on each. It is also  possible that what starts out as a NPC will become the villain  through happenstance. The villain does not even need to be one  that the party is trying to kill but one that has motivations  opposed to that of the party or one of the players. The article  does a much better job than me in describing this and I think any  DM should give it a read.

The last article of note in the magazine was "The Referee's Code  of Honor". It deals with some rules that will help with the  relationship between the DM and the players. This will help make  the DM and the campaign better. Some of the rules I might tweak  but then maybe I am not as good a DM as I think I am. Below are  those rules but if you are a DM give the full article a read.

1) Always treat your players with respect.
2) Never take a character away from a player.
3) Don't take on more than you can handle.
4) Be reliable outside the game.
5) Make the game fun for the players and yourself.
6) Take pride in your work and also in the group.

The rest of the magazine is full of normal features and a piece  of fiction. There were also a high volume of advertisements in  the magazine. I have put forth that there was a decline in the  overall quality of Dragon over time. This one hit on some high notes but the ads occupy more space than the articles or seem to  at least. In the end this is an issue to own for the articles I  describe. It can be picked up for a few bucks or perhaps less if  bought in a lot so give it a look over.

With this spell the magic user allows for a greatly increased  movement rate. The spell is intended to used outdoors though  there might be some instances where it would work in a  subterranean environment.

The spell will allow the targets to travel at a speed that will  allow them to travel a distance that would take them a week in  just one day. The distance traveled will be lessened if there are  any delays or obstacles that take more than a few rounds along  the way. The spell will also eliminate the chance for random  encounters as the speed being traveled out will make encounters  unlikely.

The spell can target both those on foot and those mounted. The  caster can mix these as desired though the travel rate for each  target is based individually on their normal travel rate. The  spell will not allow the use of wheeled transports as the  vehicles will not be affected by the magic and will not hold up.  This spell can be cast in an aquatic environment as well as on  land.

Disclaimer: The spells that you will see, for how ever long the  write ups last, were all written up or conceived of back in the  80's so the terminology may not appropriate for anything other  than 1e and depending on how well I did back then it may be  slightly off for that as well. If there is any duplication of  spells that exist now it is most likely I wrote mine first :)  Please feel free to comment on them but try not to be too hard on  me. If anyone wishes to use these in anything they print please  let me know in advance and all I ask is proper credit.
Posted by Wymarc at 10:21 AM