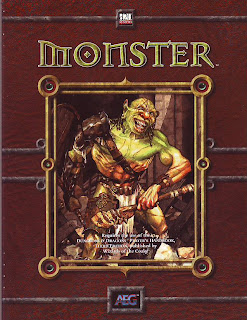 I previously reviewed Gods and talked about how it would be useful  for a HM wanting to use Monsters in their campaign. Monsters is  actually the book that addresses that option directly. I am not  sure I would ever want to run or participate in a campaign made  up strictly of monsters. I was in an "evil" campaign once and it  turned into who can commit the biggest atrocity.

In a limited scope I can see how adding some monsters/creatures  as a race might be useful. It might even be that in certain  campaigns that what are evil creatures normally are now peaceful  creatures that coexist normally with the other races. Monsters  does not take this route though so it would be up to the GM to  make some changes.

Monsters was released by AEG in 2002 under the d20/OGL platform.  The book is done in B&W with a limited amount of art but what is  used is really quite good and used to compliment the material and  not as filler. The book is 152 pages long and contains a lot of  material. Though it was originally released with a $24.95 price  sticker it can be picked up for a song now.

Monsters is broken down into six chapters. The chapters are as  follows:

The first chapter deals with what would be considered the normal  monster races that already exist in the in the d20 environment.  This sections gives an overview of the races. It addresses their  society and how they interact with other races. The capsules give  the DM an idea on how the races might function in the world as a  whole if used. The section is a good read even if the book is not  going to be sued as is.

The second chapter si where the book lays out the various races  as if they are going to be used as races in the game. The section  takes each of the races and provides overall information on them  as a race and then racial traits. The information provided about  them as a race is Personality, Physical Description, Relations,  Alignment, Their Lands, religion, Language, Names and  Adventurers. It then provides a description of a tribe from that  race to give the GM some ideas.

Chapter three presents the GM with new races that they might use.  Some of these are interesting but may too unique for most  campaign worlds. Many of these are crossbreeds from the  previously listed but there are new races entirely as well as  variants of the previously provided races. This section provides  the GM two options. the first would be to use as suggested. but I  think the option of introducing them as new monsters in the  proper format is a better option. Something that is rearing its  head after lurking in secret for centuries.

The next chapter is not a bad chapter but it is one of the  reasons I am not a big fan of the d20 3.x system as whole.  Chapter four deals with feats which I do ot have a problem with.  These I understand the need for as part of the system as whole.  The chapter does include a number of new Prestige Classes. There are actually nine new prestige classes provided. I have never been  a fan of the idea of prestige classes. To me this has always been  like getting a mini splat book in every new d20 product.

Chapter five deals with the idea of a a monster campaign. If you  have an inkling of running such a campaign this will give you a  solid idea on how it might be done and some of the pitfalls you  may encounter and how they can be avoided. This may be the most  useful chapter in the book though chapter three with the new  races offers it some strong competition. There are parts of this  chapter where the advice can be applied to a traditional  campaign.

Chapter six provides the GM with spells and magic items that  would be geared towards a monster specific campaign. With the  spells this is the case and I did not find any of the spells all  that interesting or useful. The magic items provided are better  and there are even monster artifacts provided. I can see using  these in reverse where the players need to find and then destroy  the monster artifacts. It also provides a Monster manual style entry for each from chapter three.

I can see a use for this book and am glad that I have it in my  collection. I am not sure it will ever get used for the stated  purpose but there are races that can be taken and used in a  normal campaign with a little work. It also provides the GM with  new races that can be sued as adversaries in a normal type of  campaign and then finally it provides some new magic items as  well as artifacts that be used as ongoing adventure fodder as  previously mentioned. The book can often be picked up for less  than a $1 online and even with a few bucks in shipping this is  worth the price.

Where reality ends, fantasy starts and at the heart of fantasy  lies monsters. Roaming bands of mercenary monsters run along side  their human and elven compatriots, searching out adventure and  making names for themselves. Orcs, minotaurs, and all the rest  are packed into one book. And now that you have Evil, GMs can run  full monster campaigns. Details about monster culture,  psychology, and adventuring provide GMs and PCs with enough  information to run an entire party of trolls, ogres, ettins,  orcs, goblins, and more. Rules for mixed races, new feats, and  skills only monsters know. New prestige classes, rules for PC  monster races, and new magic await.

My people have stood watch over this land for centuries. There  was a time when wars between our kind and the ogres were  commonplace. Savage, brutal campaigns left both sides demoralized  and broken, But, in one season, each would be prepared to fight  again. This was always the way of things.

The ogres have moved on, but the need for watchful eyes has not  passed.

Our brothers are savage and warlike, but we are not. Our cousins  make enemies with everyone around them, while we stand vigilant  and hopeful. Our kin take offense at the slightest  misunderstanding, provoking war with nations twice their size and  strength. It seems that no matter where we live, conflicts arise.

Our hope is to find a place where we belong and our children can  live in peace.

THIS IS A GUIDE TO EXTINCTION

This sourcebook contains everything a GM or player needs for  campaigns involving monster races as PCs. It includes all of the  information you need for playing orcs, trolls, and all manner of  monsters as player characters. Additional rules for new races and  cross-breeds are also included.

The beasts within are yours to command.

THE WEAK SHALL BE CULLED

When this spell is cast the magic user summons forth a mystical  being who will serve as a piper to lure away a number of  creatures. The piper will only be able to exist for a limited  period of time in the world of the caster though.

The piper will be able to pull away one creature for each level  of the caster. The caster targets which creatures will be  affected though they must be in hearing range of the piper and  must be able to hear the pipers music. Those selected by the  caster will be affected by the spell for at least two rounds.

After the initial period each creature affected is entitled to a  saving throw every third round. The first saving throw will be  made at -4 and then next at a -2. Future saving throws will be  made normally. The piper will continue leading the victims away  for a number of rounds equal to the casters charisma score.

The material component for this spell is a small flute like  instrument. The flute is not used up with the casting of the  spell. The cost of this item will be 100gp.

Disclaimer: The spells that you will see, for how ever long the  write ups last, were all written up or conceived of back in the  80's so the terminology may not appropriate for anything other  than 1e and depending on how well I did back then it may be  slightly off for that as well. If there is any duplication of  spells that exist now it is most likely I wrote mine first :)  Please feel free to comment on them but try not to be too hard on  me. If anyone wishes to use these in anything they print please  let me know in advance and all I ask is proper credit.
Posted by Wymarc at 6:12 AM