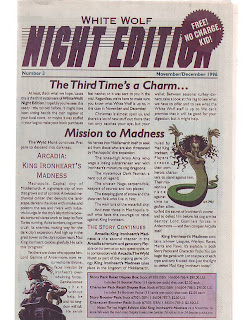 White Wolf Night Edition was a free periodical that was produced  amazingly enough by White Wolf. It was intended to support and/or promote their products. I do not see where it was mailed so it had  to be distributed through game and comic shops.

The copies I have were obtained in the secondary market. I know I  ended up purchasing just them in an eBay lot some time ago. I  wanted to see what they were and most likely overpaid but I got  six of them and paid less than $5 including shipping. The issue  above is #3 and it was bi-monthly. The next issue I have is #6  and it had moved to quarterly by then. The last issue I have is  #18 and that was fall of 2000 so I know it ran for at least that  long.

Being close to magazines these are something I find fun to read.  It is also nice to be able to see what was planned by the company  and then compare it to what actually happened. I guess in the end  it really just clutter though as it offers no really measurable  gaming support. In a society where one of the most profitable  businesses is self storage units and PODS I guess I am not the  only one that keeps stuff like this!

When the spell is initially cast the magic user will be able to see what other spells that the target has memorized. This spell will only work on targets that memorize spells and not one that only have spell like abilities. The DM will need to present the caster with just the list of spells that have left not what might have been memorized and already used and not their full list of available spells.

After getting the list the caster will then be able to pick a spell and have it wiped from the mind of the victim. If this spell is fourth level or lower then there is no saving throw. The spell will simply vanish. If the spell is higher than fourth then the victim is entitled to a saving throw. If the initial spell is eliminated then the caster can pick another to have vanish. Regardless of this spells level the victim will get a save. If made the spell is not lost otherwise it will be lost as well. This process will continue until a save is made. Saving throws after the second are made with a progressive +1 until the process stops.

Disclaimer: The spells that you will see, for how ever long the write ups last, were all written up or conceived of back in the 80's so the terminology may not appropriate for anything other than 1e and depending on how well I did back then it may be slightly off for that as well. If there is any duplication of spells that exist now it is most likely I wrote mine first :) Please feel free to comment on them but try not to be too hard on me. If anyone wishes to use these in anything they print please let me know in advance and all I ask is proper credit.
Posted by Wymarc at 5:10 AM