I2 - Tomb of the Lizard King, Cassandra's Randomization 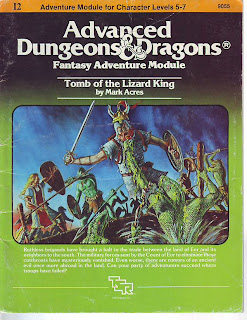 In comics they are grouped by Ages. The first age referred to is  the Golden Age which are the oldest. Next Comes the Silver Age of  comics. This is when most of the comics people know today got  their start. If you look at it beyond the monetary value I think  the Silver Age was the epitome of what makes comics great. I  mention all of this because I would call the early 80's the  Solver Age of Modules.

I2 - Tomb of the Lizard King, released in 1982 is a module that is way to often overlooked. I have myself fallen prey to this. For some unknown reason I always think of Dwellers of the Forbidden City before I think of this forgotten gem. I know Dwellers is probably a "better" module but I remember this one being a lot of fun but then I was the DM.

This module if run right can come close to competing with Tomb of  Horrors for being able to kill the entire party without too much  bad luck occurring. A party that does not exercise a certain  level of caution will most like be rolling up new characters.  This has more of a plot than the Tomb of Horrors. I am not saying  it is a better module just that it has more of a plot. Below is  the warning in the module.

"Special Warning: Before beginning play the Dungeon Master should  warn his players that this particular module is extremely  hazardous. It is specifically designed to put characters of the  specified levels to a severe test. Success in this adventure will  require that the party exercise the utmost caution, think a great deal, and still be ready to “hack and slash” against powerful  opponents. Some players may not want to risk their favorite  characters in an adventure of this difficulty. In such cases, it  is recommended that the Dungeon Master allow the use of the  pregenerated characters included in the back pages of this  module."

I won't go into too much detail but the module starts things off  right away and does not let up too often. The module tries to  pack in as many different things to kill as it can and makes  somethings tougher than you would have thought possible.  The  module combines roleplaying, riddle solving, wilderness and a  good old dungeon crawl in good measure. The roleplaying option in  this one for the DM is nothing short of golden....playing crazy  is fun! The art inside is by Jeff Easley and Jim Holloway which  only adds to its appeal.

The module is common enough in the secondary market. If you want  to pick this up you should not have to spend anymore than what  you would pay for a new printed module today and may end paying  less. I know this did not make the official Top 30 Adventure List  but if I were going to make my own this would easily replace one  of the others on the list.

"The southlands of Eor are being despoiled. Merchants will no  longer run their caravans on the main highway past the quiet  village of Waycombe. The peasants are fleeing their lands, and  all are demanding protection from the powerful Count of Eor. The  goodly count has sent a troop of his trusted fighters to  exterminate the brigands believed responsible for these outrages,  but weeks have passed, and still there is no word from this  force.

Now John Brunis, Count of Eor, has turned to you for aid. After  taking counsel with the High Priest of Eor, he believes that a  small party of cunning, bold adventurers may succeed where armed  might has failed. You find yourselves faced with many mysteries!

Why has robbery suddenly erupted in the peaceful southlands?

How could mere brigands be as powerful as the foes described to  you by their numerous victims?

Is this really mere robbery? Or is there some truth to the  rumors, told only in hushed whispers, about the beginnings of a  hideous plot being hatched by an ancient, vile and evil foe of  all mankind?

The answers to these mysteries will be found by only the most  brave and cunning in this extremely challenging adventure for  characters levels 5-7."

When this spell is cast the magic user causes all creatures  inside the area of effect that are not party of their party to  polymorph into random creatures that would be appropriate to the  location. In addition the affected will be teleported away to a  random location. Victims who save will still be polymorphed and  teleported but the duration of the effects will halved.

When this spell is cast the DM will need to randomly determine  what the affected is polymorphed into. If there is a random  monster table in use this would be the best option though this is  up to the DM's discretion. Whatever the creature the victim  becomes they will have the sole purpose, unless mindless, to find  the caster who is now their prey. They will become wandering  monsters looking for the party.

The victims will also be teleported to a random location that  would be considered within the confines of the area they were  previously in. If in a dungeon that is clear but in a house in a  city it would be the city and not the house. For wilderness areas  it will be to a random location that they creature could return  to the location from in one half the duration of the spell effect  for them.

polymorphed but will be pulled back to their original  location. At the end of the spells duration all victims will be  pulled back and returned to their normal form. There is no chance  of permanency from the polymorph effect from this spell.

The material components of this spell will be a small functional  hourglass and a gem of no less than 500gp in value. Both will be  consumed with the casting of the spell which will buy the caster  some time to get done what they need.

Disclaimer: The spells that you will see, for how ever long the  write ups last, were all written up or conceived of back in the  80's so the terminology may not appropriate for anything other  than 1e and depending on how well I did back then it may be  slightly off for that as well. If there is any duplication of  spells that exist now it is most likely I wrote mine first :)  Please feel free to comment on them but try not to be too hard on  me. If anyone wishes to use these in anything they print please  let me know in advance and all I ask is proper credit.
Posted by Wymarc at 9:30 AM

I loved this adventure. I played in it once and ran this module several times, hopefully again within the next year. It's really unique and well-done, and not to be written off as "too railroady" because of a linear plot.

I do suggest watering down or changing a couple of the traps, one that is literally instant death for one or more characters, one that drains every magic item held by a character, and a complex one that comes right after the first instant kill trap and can lead to similar instant kills.

The other traps and threats within the module as well as the superior information available to the villains make it plenty tough without the "bogus" insta-kill traps being used.