B6 - The Veilded Society, Berserker 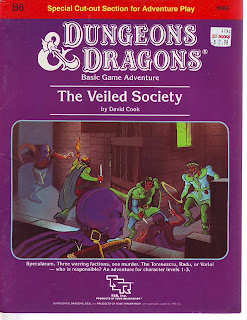 There are some modules that seem to be harder than they should  for me to get copies of for one reason or another. B6 - The  Veiled Society was such a module for the longest time. The problem was wanting one with the cardboard buildings, and such,  intact. I am not sure if this copy or another is the final one  that allowed me to stop looking at these.

The Veiled Society is an unusual offering in that it is a city  based encounter in the B series. I do not think that there is  another urban based adventure in the B series. If I am mistaken  please be sure and post letting me know. The atmosphere for this  is also a little darker than any of the other modules in the line  up to it.

The module was released in 1984 and was penned by David "Zeb"  Cook. The module portion of B6 is only sixteen pages long but  there are another sixteen pages in cardboard buildings and paper  miniatures. It was the latter of these that seemed to never be  present when I found a copy in a good enough shape that I would  buy it. The setting is the city of Specularum in the Grand Duchy  of Karameikos.

The adventure in the module is not your average module fare for  the Basic series of modules. This involves political intrigue and  a power struggle to gain control of the city. There are three  major factions involved and then the mysterious Veiled Society.  The module allows the players the option to take one or more  sides and either aid or hinder the plots of the other factions.  The players might even end up playing one off against another to  aid the third and then switch allegiances. I won't go into too  much more detail.

The module contained a flowchart of encounters which I do not  think had been used before in any of the earlier TSR modules.  This is quite common now but was a new idea back then. The total  number of encounters is actually quite small coming in at seven.  Each of these will have a block of dialogue that is intended to  be commentary from the Veiled Society.

In the end the module is not one of the great ones but it is a  nice diversion from the other modules in the Basic series. It  also has some ideas that can be pulled out even if the adventure  as whole is not used. The module will allow for a little more  role playing than some others so that is always a plus. I am glad  I was finally able to get my copy of the module but to be honest  in this case the chase was better than the reward.

The Widow insists there are demons in her house. She hears them  at night in her root cellar, and now they call out to her. But  she is old and nervous and her mind often plays tricks on her.

Two men, their heads fully sheathed in large black hoods, dig  quickly in the darkness of the cellar. The hole grows deeper as  their shovels bit into the earth.

"This will teach those meddlers their place," laughs the tall,  hefty figure.

"But it's too bad this was an accident," the shorter, slim figure  says haltingly.

"But don't you see the advantage?" snapped the tall man. "They  will fear us now. They will fear for their lives."

Grunting, they heave a sailcloth bundle into the hole. As it  falls, a woman's hand dangles lifelessly from the folds.

Who is the woman? Why will her death trigger riots and unrest in  the city of Specularum?

And the assassins: Are they Torenescu, Radu, or Vorloi? Or, curse  of curses, the Veiled Society?

This special game adventure provides a section of paper buildings  and figures to cut out and use, giving you three dimensions to  your game play!

When this spell is cast the magic user is able to turn the target  creature into a death dealing machine. The target creature must be willing and the cater must be able to touch the creature to  make the spell take hold.

The effects of the spell will not be visible but they will be  dramatic none the less. The creature will have their total hit points doubled. The will also have all attacks they may at an  additional +4 to hit and will do double damage as a base number. In addition the normal number of attacks they are allowed will be doubled. Their  effective armor class will be lessened by a factor of four though and they can not stop attacking until the spell expires even if  that means going after allies or innocents.

The great benefits of the spell do not come without cost though.  When the spell expires they will lose one quarter of their  remaining hit points and then the bonus hit points will be  removed. They will then need to make a saving throw versus Death  or fall into a deep slumber (if they did not go into negative hit  points already) for a number of rounds equal to the time they  spent under the effect of the spell. They will also temporarily  lose 3-9 points of constitution but will regain these at a rate  of three points per day. They must make another saving throw  versus magic on the final day or one point of the constitution  loss will be permanent.

The material component of this spell is an alcoholic concoction  that is imbues with other components. The mixture will be consumed  by the caster during the casting of the spell. At the end of the  spells duration the caster will need to make a save versus poison  or become inebriated.

Disclaimer: The spells that you will see, for how ever long the  write ups last, were all written up or conceived of back in the  80's so the terminology may not appropriate for anything other  than 1e and depending on how well I did back then it may be  slightly off for that as well. If there is any duplication of  spells that exist now it is most likely I wrote mine first :)  Please feel free to comment on them but try not to be too hard on  me. If anyone wishes to use these in anything they print please  let me know in advance and all I ask is proper credit.
Posted by Wymarc at 5:00 AM