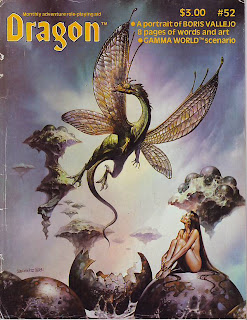 Dragon #52 hits us right off the bat with a great cover by Boris  Vallejo. I have always appreciated his art as he is after all one  of the most iconic fantasy artist of all times. Most of his work  has never inspired my imagination like the one of this cover. The  cover just lays the groundwork though.

Looking through these old issues are really often bittersweet. It  is nice to relive some of the memories but then it hits home that  it may never be this good again. It is possible that in 30 years  someone the age I am now will be saying the same things I am now  but just like comics and TV sometimes the best stuff will most  often always be the older stuff.

The first article in the magazine is one dealing with clerics. It  is actually a set of three related article written by two  different authors. The three articles drive home to me how much  clerics often become divine magic users more than agents of their  deities. Played right a cleric should not be wandering dungeons  with nonbelievers unless it directly serves the agenda of their  church. Even then they should be trying to convert or at the  worst admonishing those who do not believe.

The next article is by none other than J. Eric Holmes who is  discussing the basic set of his creation as well as that of Tom  Moldvay. The article is broken up though by another article which  I would normally hate except in this case it is commentary by Tom  Moldvay. These two articles alone make the magazine one to own.  If it has not been done I think gaming companies should scour the  older publications for insight into games design like this and  make it part of a company manual.

The next offering may be one of the articles I used most while I  was running a campaign set in Greyhawk. It is Leomund's Tiny Hut,  written by Lenard Lakofka, it is one of the regular columns in  the magazine. This topic is birth tables for the world of  Greyhawk. It starts with the tables for human characters along  with possible alignments from each location. It then provides a  table and sub-table for demihumans with the primary table being  what be considered demi-human lands and the sub-table being the  possible locations where demi-humans might also be born. It then goes over the languages that might be spoken by  inhabitants of each realm in an exhaustive manner. It then ends with an appendix by Gary  Gygax concerning the human racial types in Greyhawk. Just a whole  level up of awesomeness here!

The next article deals with undercover jobs. The information on  salaries will be dated as it was written thirty years ago. It is funny to see those numbers though and how the levels for each  profession have shifted some. The item that is still useful is  that it rates each profession as far as their travel potential.  This plays a role in what profession they may want to be hidden  in. How may conferences can a elementary school teacher really  play off that they are going to.

Next is the cover story article on Boris. This is a nice read  but as I said earlier he has never been a favorite of mine and I  bought these magazines way back when for gaming purposes. Not a  selling point for me but it might be for some.

The next article was one of my favorite parts of issues from  Dragon from that era. It is the Giants In the Earth series. This  one deals with island enchanters. The two topics of this offering  are Prospero and Circe. I had not noticed until writing this that  the author for this is Katherine Kerr who has gone on to write a  number of well received fantasy series.

Next is a short Gamma World scenario called Cavern of the Sub-Train. It is intended for beginning to intermediate level players  and deals with them exploring a recently discovered subway  system. I do not think that I ever ran this and I for the life of  me can't imagine why. I will have to remember this if I ever get  a chance to run 1e Gamma World again.

Following another regular column, the Dragon's Bestiary, we are  presented with an article on the history of siege warfare. I  recall as a teen that this was most likely my first real exposure to this type of information. We discussed sieges in history  classes but never with the detail on what was involved just that  it happened.

We are next presented with an article that was in response to a  readers letter from an earlier issue. I wonder how many letters  were sent in as a result of just announcing that. I have spoken  ill of prestige classes many times so I hate bringing up these  but the article presents three variants of bounty hunters. One is  a merger of rangers and assassins. The second  is a hybrid ranger  and thief class and the latter is a subclass of fighter. I prefer  the middle offering but feel like a hypocrite in even saying  that. I did roll one up as a player at one time I think :(

There are a number of other normal offerings in the magazine that  I won't write about. I do want to mention the Minarian Legends  though. This series has to be on of the most overlooked gems from  that time period. It takes the world from the Divine Right games  and expands it in such a way that it could be used as a campaign  setting. Something I still might get around to doing sometime.

Note: Missed yesterday due to an Internet outage. Actually it was  cable, phone and Internet. The story about not putting all your  eggs into one basket came to mind often yesterday!

This spell allows the magic user to cause a series of increasing  pains to occur in the target creature. The spell will cause  increasing levels of damage as well as hinder the target.

The spell will start by doing 1s4 for the initial round of the  spell. The creature will be entitled to a saving throw and if  made they will suffer half damage rounded up. The spell will  cause a progression in the possible damage by one dice type each  round (d6, d8, d10,d12 & d20). The target is entitled to a save  each round to halve the damage.

In addition to the damage the spell will hinder any actions that  the target creature may be attempting. The saving throw made each  round for damage will determine how the creature is affected. For  each round after the first if the save is made the creature will  suffer a -2 to all to hit, damage and saving throw rolls. They  will also suffer a +2 to their effective armor class. If the save  is failed then it becomes a -4 to all rolls but the +2 will  remain the same. The spell will not prevent any actions just make  them less effective or harder to accomplish.

Disclaimer: The spells that you will see, for how ever long the  write ups last, were all written up or conceived of back in the  80's so the terminology may not appropriate for anything other  than 1e and depending on how well I did back then it may be  slightly off for that as well. If there is any duplication of  spells that exist now it is most likely I wrote mine first :)  Please feel free to comment on them but try not to be too hard on  me. If anyone wishes to use these in anything they print please  let me know in advance and all I ask is proper credit.
Posted by Wymarc at 10:11 AM

OK, a little confused on Wracking Pains. If you make the initial save do you take half damage throughout the spell? Or do you have to save each round?

The way it reads to me is if you make the initial save, you take half damage throughout, but if you fail the initial save you still get a chance each round to reduce the damage.

The save is made each round individually. Failing or saving in a round does not affect other rounds.