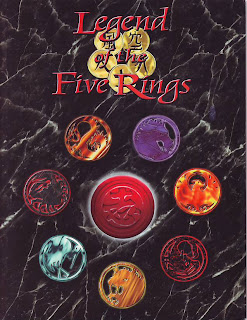 Legend of the Five Rings is a game that I wish I knew more about.  I had the misfortune of having it come out while I was in the  depth of my M:tG addiction. It was released in 1997 for the first  edition of L5R by Alderac Entertainment Group. I know it was  popular and had quite a following. The concept of a game based on  an oriental culture has intrigued me going back to Bushido and  Oriental Adventures from TSR.

The item above is one of those items that I am not sure how I  came across it or why I bought it. I suspect it was part of a  bulk lot I bought at an auction or off eBay perhaps. I am not  sure that I even own the L5R core rulebook. If I don't own the  game owning the Game Master's Pack does not seem like a logical  acquisition but then sometimes logic does not factor into the  situation.

The Game Master's Pack your standard GM Screen and includes a  book of supplemental material. In the book are new rules and a  short adventure. I have not had a chance or really a reason to  review the book so this is not much of a review. I will hopefully  someday have reason to use this or better yet see it in use from  the players side of the screen...mental note that would be a  great title for a blog or a series of articles.

The following was taken from RPG Geek:

The sphere will be able to send away a limited number of  individuals per round. This will be a number equal to the level  of the caster. If more than that number try to enter the sphere  then any in excess will make it through for the remainder of that  round. If at any point anyone in the caster's party or the caster  themselves leave the sphere then the spell is broken.

The material component of this spell will be a crystal sphere.  The sphere will not be used up with the casting of the spell and  may be reused.

Disclaimer: The spells that you will see, for how ever long the  write ups last, were all written up or conceived of back in the  80's so the terminology may not appropriate for anything other  than 1e and depending on how well I did back then it may be  slightly off for that as well. If there is any duplication of  spells that exist now it is most likely I wrote mine first :)  Please feel free to comment on them but try not to be too hard on  me. If anyone wishes to use these in anything they print please  let me know in advance and all I ask is proper credit.
Posted by Wymarc at 6:02 AM